I hope you had a wonderful Halloween. I bring you this Newsletter as a mid-term round-up of my work over the last few months:

I hope there is something that will spark your interest and as ever I encourage you to get in touch if you would like to discuss or contribute to any of my work.

On Monday 3 November, myself, Senator Averil Power and Senator Fidelma Healy Eames launched our new Adoption (Information and Identity) Bill 2014. The purpose of the Bill is to allow adopted people over the age of 18 years to access information relating to their birth and adoption, and in particular to obtain their original birth certificate. The natural parent of an adopted person is also permitted to request certain information. The overall aim of the Bill is to vindicate the adopted person’s right to know his or her identity. Due weight is given to the privacy rights of all relevant persons. The Bill is also designed to make it easier for adopted people and their natural parents to make contact with each other.

We need to fundamentally reconsider how we approach adoption in Ireland. Our current system of closed adoptions means there are more than 50,000 adopted people who have no automatic legal right to their birth certificate or early care records, no legal right to relevant medial information, or any legal right to trace information about their identity and genealogy. The impact of this State supported vacuum can only truly be known by the adopted people affected and we cannot ignore their voices or their needs any longer. Surely there is nothing more basic, more necessary, than the right to know who you are?

This right is afforded to all persons from the outset, for example the United Nations Convention on the Rights of the Child, which Ireland has both signed (1990) and ratified (1992) expressly recognises the right of the child to preserve (Article 8.1) and know (Article 8.2) his or her identity.

We look forward to wide consultation on the Bill to make it as robust and supportive to adopted people in Ireland. 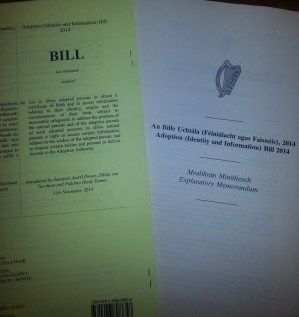 The Civil Registration Bill recently completed its passage through the Seanad. It will make it compulsory to register the name of the father on all birth certificates. In an attempt to reverse a change made in the Adoption Act 2010, I requested an amendment to the Adoption Act to ensure that the document used by adopted people as a birth certificate must refer to the fact that they are adopted. I was not successful but will continue to pursue this issue.

Senators were only afforded a short few minutes to respond to Budget 2015, on 14 October, and so my statement was brief to say the least. I do intend to raise some of my concerns when the Social Welfare Bill is debated in December. The main issue I raised in October was the failure to invest in services, such as childcare along the lines of the Scandinavian model we have been promised. You can read my statement here.

In the Seanad I raised how the Rates can vary greatly for providers of Early Child Care and Education around Ireland. I am working with Minister Simon Harris TD to see if we can find a workable solution to support this essential service. Check out what I said here

Thank you to all who supported Senator David Norris and I in our Bill that hoped to provide a pathway to residency for asylum seekers who have been awaiting a decision on their protection application for 4 years or more. This Bill was not drafted in the belief that it was a panacea for all the shortcomings of the current status determination system and we had hoped to strengthen it further along the legislative journey. Sadly we did not get the support of Sinn Fein or the Government – the Minister was “opposed to the Bill even at a conceptual level”. And so we just missed out on getting the Bill to next stage. I am very disappointed, particularly at the lost opportunity to keep the asylum system and Direct Provision on the legislative agenda of the Seanad, but I will keep fighting for a radically reformed and fair system. See press release from NASC Ireland showing their support.

It was such a pleasure to attend The Irish Hospice Foundation’s Ireland’s Biggest Coffee Morning, the main annual fundraising event to provide much needed support for local hospice services, which was held in Bewley’s on Grafton Street on 18 September.

I was delighted to co-host with Deputy Jerry Buttimer the second annual Oireachtas coffee morning in support of ISPCC Childline on 9 October. Childline has issued an emergency appeal for funds to help save its night-time call service. Thanks to a great turnout and generous contributions from Members and staff we raised an impressive €860, which will go toward Childline answering more calls and messages from vulnerable children and young people day and night. I want to say a massive thank you to all involved: those who donated raffle prizes; the Oireachtas Restaurant for sponsoring the teas and coffees; my assistant Amy for organising the event; and the ISPCC and Childline Volunteers who attended on the morning. I want to specially thank Childline Volunteer Monica Rowe whose short presentation to attendees gave a unique and moving insight into the importance of Childline’s work. I was particularly moved by her description of the three typical calls Volunteers in Childline receive:

On 16 October, as a member of the assessment panel, I had the honour of attending the EESC (European Economic and Social Committee) 2014 Civil Society Prize Ceremony in Brussels. This year’s prize was aimed at organisations or individuals who have undertaken outstanding projects to improve the economic and social inclusion of Roma people and communities. ETP Slovakia-Centre for Sustainable Development received first prize for their project A bridge of hope in Slovakia, through which they teach Roma communities in Slovakia how to construct their own houses. In accepting their prize, ETP director Slávka Mačáková said, “We hope that our self-empowering initiative will be a role model for European policy-makers”. IQ Roma servis from the Czech Republic and Reverend Archimandrite Athinagoras Loukataris from Greece shared the 2nd prize.