I had the great honour to meet and discuss a wide range of issues with European Commissioner for Competition, Margrethe Vestager, during her recent visit to Dublin. After our dinner, I presented her an award for her role in promoting Women in Leadership. The event was hosted in Dublin by European Movement Ireland, Sodexo Ireland, and the Central Bank of Ireland. 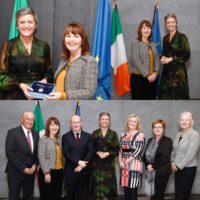